Going to the Chapel
Gonna get Married

Have you ever had a pair of breedables that you wanted mated to each other on a permanent basis?

Have you ever forgotten to re-mate a pair of pets after the mother delivers a baby?

Have you ever had to spend an entire reproductive cycle of your pet just to get an unwanted baby, and hope that you get the right pets mated together in time before the next mating occurs?

Well, we at Ani-Cats staff recognize the issues that can arise from an unwanted mating and have found a great solution for you. We let you Marry your pets as you mate them!

"What's the difference between mated and married?", you might ask. Well, pets being mated last only as long as the mating must be maintained. For a male, that mating ends after the female is made pregnant. For the female, the mating ends when the kitten has been born.

With marriage, the connection lasts far longer. It could be for the full lifetime of your pets. If you send one of the married pair to Purradise, the marriage is dissolved.

In extreme circumstances, you can dissolve the marriage yourself by applying a Divorce Potion to either of the cats in that marriage. Yes, there is a cost to the divorce. However, just like in real life, marriage is entered into freely (relatively), but divorce has a price to pay.

In order to marry your pets together, simply touch the Mate button

on your HUD after touching one of the two cats in the pairing.

After doing this, you are presented with the first dialog box of the mating process, asking if you wish to Mate or Marry these pets. 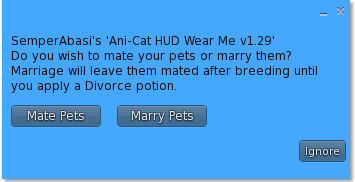 If you choose 'Marry', your pets will be permanently bonded together for the rest of their lives. After this process is completed, feel free to throw rice. Just remember, if you throw it in real life, you have to do you own cleaning.

Once pets are married, you have an easy way to determine the 'current status' of those pets. Their hover text, and the text you see on the HUD when touching one ofthose pets will have double asterisks (**) surrounding the name of their mate. Those double asterisks are the indicator that they put a ring on it.

Please be aware of the marriage status of any pet you might buy at auction or from a market place. If you buy a married pet, either you, or the owner of the mate might have to spend money on a Divorce Potion to separate those pets. If you choose to leave them married, they will still need to be on the same region, within range of each other, to create more kittens.